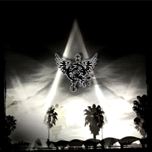 Hot off the press! Arnaud Barbe, who runs the Sirona Records netlabel, just unleashed his 300th release, Sincerity Is The Key: a virtual box set of containing over 7 CDs...9 hours of free music.